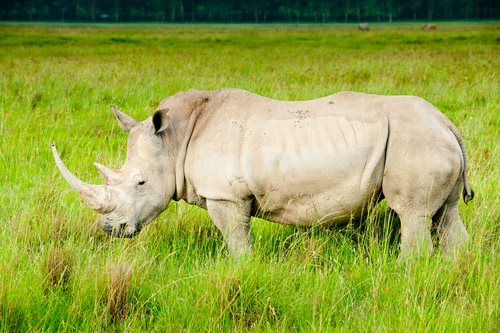 Despite tighter international controls on ivory, the World Wildlife Fund (WWF) warns that African Rhinos may become extinct in 10 years if immediate action is not taken by the international community.  The WWF reports that 588 rhinos and tens of thousands of elephants were killed in 2012.

There are several reasons for the increased amount of rhino poaching: the demand for rhino horn in Asia continues to increase, and local citizens in Africa can earn a substantial amount of money from just several poaches.

Dr Joseph Okori, the WWF’s African Rhino Programme leader, states: “Villagers are at the bottom of the chain and can earn several months income through two or three days of poaching.  Huge amounts of money is in circulation.”

Laws and regulations against ivory trade already exist at the federal level and state level in the United States.  For example, the Endangered Species Act of 1973 and the African Elephant Conservation Act of 1989 specifically outlaw the trading of ivory, and state laws vary between jurisdictions.  The Convention on International Trade in Endangered Species of Wild Fauna and Flora (CITIES) also banned the illegal trading of ivory.

Still, the WWF states that more regulations and stricter penalties need instituted and consuming nations need to decrease their demand for illegal ivory immediately to save the African Rhino.

Namibia is an example of increasing protection for the African Rhino.  The country’s government works with local populations and developed a management plan to protect the rhinos.  The country has the lowest rate of poaching in all of Africa.  Similar management plans are reaching Botswana, South Africa, and Zambia as well.

The WWF has also developed a DNA registry for a total of 5,600 rhinos.  The DNA information can help African governments track down and try poachers in court.

Hakan Wirtén, the Secretary General of WWF Sweden, called out to the international community to help save the African Rhino: “We welcome the fact that the Swedish government has provided increased support for stricter border control, as well as other measures to combat smuggling and poaching.  Both governments and tourists need to take more responsibility.  People should absolutely not buy souvenirs from endangered species or carved ivory souvenirs while on holiday.”