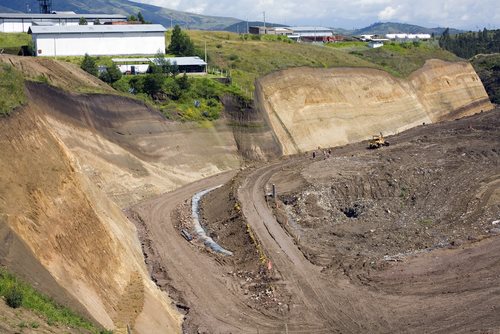 On November 9, 2012, the New Hampshire Department of Environmental Services declared that the last unlined landfill in the state stopped operations.  Before officially closing, the Farmington landfill made improvements to grading and drainage, and a low-permeability soil cap was put into place.

Thomas S. Burack, the NH DES Commissioner, made note that a large percentage of landfills in the state used methods that affected the land, air, water, and human health before the Department of Environmental Services was created in 1987.

Burack noted that before the formation of the DES, “Residents [in most towns] brought their trash to the “town dump,” where it was burned in the open or in low-tech incinerators, or dumped on the land directly.”  He went on to say that “Partially burned and unburned waste was often left uncovered, inviting vermin and posing a risk of disease transmission.”

Open burning stopped in New Hampshire by the mid-1980s, but many of the landfills remained unlined.  Most landfills would simply cover the trash with soil by the end of each day, and 108 unlined municipal landfills were still operating in 1987.  All these landfills contaminated groundwater—some more than others.

State and federal laws encouraged New Hampshire municipalities to stop operating unlined landfills by the early 1990s, but the closing of the landfills put a large amount of financial burden on some towns because of capping, drainage, and groundwater monitoring requirements.

In order to address the financial strain, the Unlined Municipal Landfill Closure Grant Program was passed in 1994.  Under the grant, towns became eligible for a 20 percent matching grant if they closed their unlined landfill properly.  The program was embraced more and more, and with the closing of the last unlined landfill in Farmington, the program has provided $30 million to a total of 116 towns to help close 107 unlined landfills.

Thomas Burack praised the closing of the last unlined landfill, but he made clear that the state still faces huge challenges in solid waste management.   The state still needs to address how to reduce the overall amount of waste and how to increase recycling and composting.  Additionally, the state needs to embrace more waste-to-energy technologies, land-filling procedures, and incineration techniques.

The state of New Hampshire is responsible for roughly 1.3 million tons of solid waste each year.  It is estimated that each person is accountable for about four pounds of solid waste every year.

DHEC Complaints At A Glance